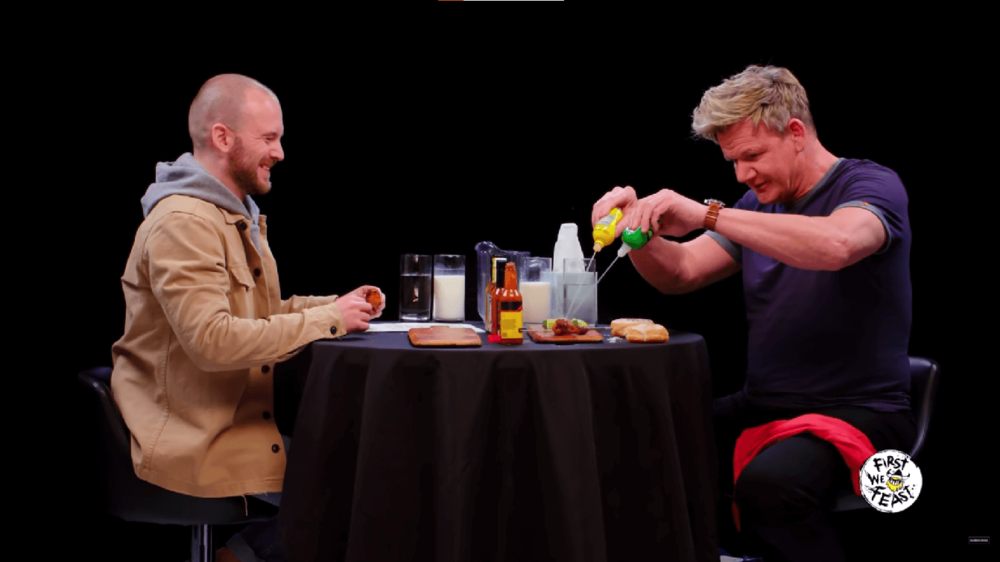 Saying that the YouTube series Hot Ones has grown into a true phenomenon is still putting it mildly (pun intended), especially if you look at the ‘view-count’ of the episode with Gordon Ramsay. At the time of writing, the milestone of 100 million views has just been reached, making it the first Hot Ones video to break this magical barrier. An unbelievable number and that’s why we want to take a look at this chicken-wing tasting of epic proportions.

In the run-up to this episode, fans have been asking for an episode with Gordon Ramsay for seasons in a row and on January 24, 2019, the time had finally come. Ofcourse Gordon already knows that hot sauce can cause quite a burn (especially if you go up to Da Bomb Beyond Insanity and beyond), so he came well prepared with a bag full of ‘hot sauce remidies’. We’ll list them all and explain why it works or doesn’t work.

With every Hot Ones episode there is already a glass of water on the table for the guests. It can certainly be refreshing (if the water is cold), but in principle water only makes it worse. Capsaicin, the substance that makes peppers and hot sauce hot, is an oil and that does not mix with water. So all you do is spread the heat further in your mouth.

Just as there is a glass of water ready for the guest, they also have a glass of milk on the table. The longer it sits, the nastier it gets of course, but it does work against the heat. Sort of, because once you swallow it, the heat will come back quickly. Like other dairy products, milk contains a protein called casein. This protein helps break down the capsaicin. The capsaicin molecules are attracted to and surrounded by the casein from the milk and it breaks down.

To be honest, when he grabbed the pink drink after Da Bomb Beyond Insanity, we didn’t know what it was. At first we thought of a kind of yogurt drink, which should work just like milk. Especially if it was a yoghurt drink with lots of sugar added. However, after some research, it appears that it is Pepto Bismol, which is a popular medicine in America for diarrhea and stomach pain. We don’t know whether it provides immediate relief, but it seems like a thing that you should use a little longer after consuming the hot sauce.

The next ‘resort’ is lime and he even smears it on his lips to relieve the pain. On paper it should work, as acidic ingredients like lime(juice) and lemon(juice) help neutralize the pH levels of spicy ingredients. This should make the burning sensation go away, but it’s no match for Da Bomb levels in terms of heat.

After both Gordon and host Sean Evans start on the donuts to put out the fire, they seem to agree: the donuts help a little. How come? Because of the large amount of sugar it contains. The sugar helps absorb the capsaicin and combined with the mass of a donut, the amount of capsaicin is diluted/absorbed quite well. Still, it won’t completely help against the spiciest hot sauces.

Finally, he almost literally reached for the ‘big guns’: lime and lemon juice in a squeeze bottle. It works exactly as we have already explained with ‘Lime‘, so there is not much more to add. Except that the force with which he squirts it on the wing causes some of the hot sauce to be blown off the chicken wing. It is a bit of cheating and it certainly doesn’t make the chicken wing any tastier, but it works..

Want to see the full episode where Gordon Ramsay swears a whopping 128 times? You can do that below!

Would you like to try the Hot Ones Challenge with 10 increasingly spicy hot sauces yourself? Then you can order it here! For an overview of all the hot sauces used in all Hot Ones seasons you can go here.

Oh and then there’s more, because Gordon Ramsay will return to  Hot Ones very soon (at the moment of writing). On December 23, there will be a new episode with the British chef, in which they collect money for a good cause. If only that episode gets nearly as epic as this one, we can’t wait!

After a long process with a lot of tasting and especially a lot of love, we developed a hot sauce together with Nicky Toet from the awesome YouTube channel Eten Met Nick. Or as Nick himself would say; a hatsas (his pronounciation of hot sauce). Pretty soon in Nick’s YouTube career we found out that […]