“What is the hottest sauce you have?” 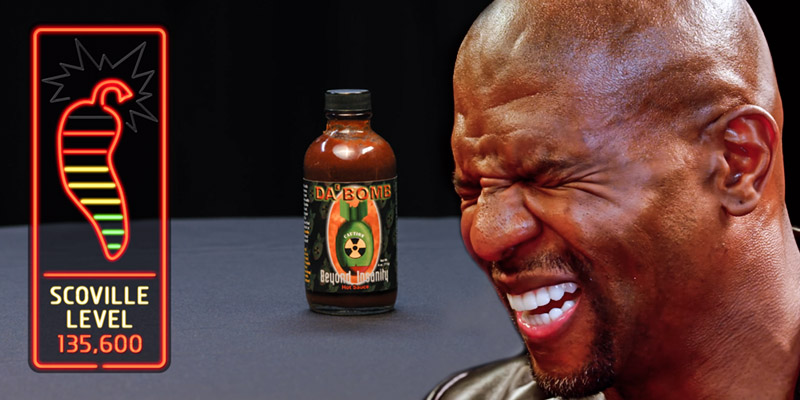 We regularly get the question “What is the hottest sauce you have?”. From this we conclude that you are either a very experienced chili head and only want to eat the hottest sauces, or that you just want to experience what it is like to go completely broke or that you want to take revenge on a friend for one or more another reason. Why you want to know exactly doesn’t matter for us, but there are a few caveats that we have to make.

It’s not the same for everyone

The answer to this frequently asked question is somewhat subjective. Some people have a harder time with some peppers than others. The different peppers also behave differently. A Habanero pepper provides a direct burn that is quite strong, while the Ghost Pepper is a real creeper. It kicks in much later. The Carolina Reaper has quite a long afterburn (and kicks in a bit later). It’s all about what you’re comfortable with and what you can handle. That can really vary from person to person.

The Carolina Reaper is officially the hottest pepper currently available in terms of Scoville Heat Units. We sell sauces made with this pepper, but we don’t always experience it as the spiciest we have. The Reaper has a floral character and a delicious flavor. In addition, added ingredients (such as tomato, onions and the like) can reduce the spiciness considerably.

One of the hottest, or maybe even THE hottest, is Hellfire Doomed Hot Sauce with an official Scoville rating of 2.7 million SHU. That is incredibly hot and that heat comes from the Habanero, Trinidad Scorpion and a natural chili extract with a mind blowing 6.6 million SHU. Insane! But just because we think that is the hottest, there is one more that makes life difficult for literally anyone who has tried it: Da Bomb Beyond Insanity. Not just customers, but also every guest in the YouTube show Hot Ones struggles with this one.

So basically our answer to the question “What is the hottest sauce you have?” is Da Bomb Beyond Insanity or Hellfire Doomed.